2 letter from minor afghan refugees after a hungerstike in the prison of Pagani. 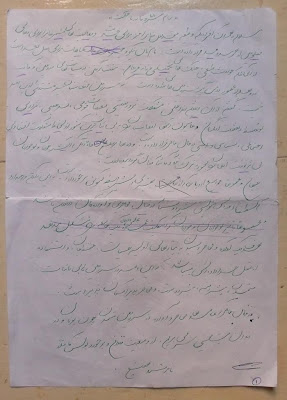 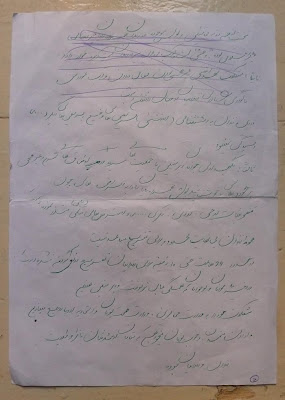 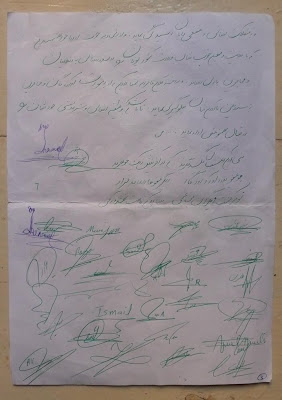 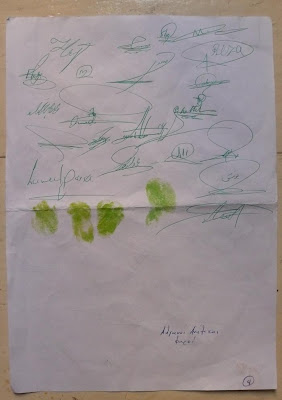 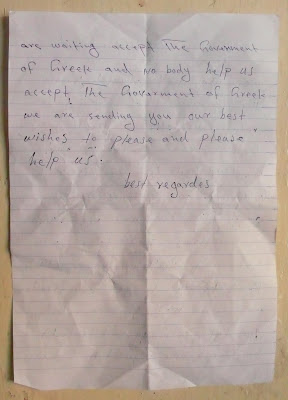 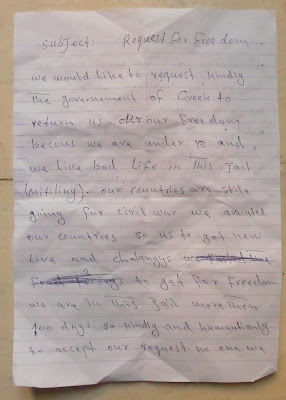 the boat left without the refugees in SAMOS.

in the city VATHY in Samos island lokal solidarity groups where

that had destination the town KAVALA.

The ship left after 3 hours

blockedd entrance wihout the 60 afgahn and somali people that where

going to be deported.

New FRONTEX ship in the harbour of MITILINI acting as greenpeace

a Rumanian ship of FRONTEX is since yeasterday in the harbour of Mitilini
ready to  replace the Italian FRONTEX ship that was here last month.
you can enjoy both on this picture and also  apreciate how the rumanians pretend to be greenpeace.....
For the short period both ships will kollaborate in the greek border ,
the italian ship will depart on the 5 of august.
the rumanian one will stay for one month in the harbour of mitlini.
(informations from the Mitlini newspaper EMBROS 01.08.2009)
Eingestellt von busyshadows um 17:03

After a police abduction that travelled them from the southern end of the country to the northern, the Kurdish refugees who reached the shores of Crete seem to have been transferred to Rodopi, Thrace on the North. There is an ongoing campaign against their deportation, especially the deportation of the children among them and of the ones that have already filed asylum applications in Chania.
In Greek, see http://fmkritis.wordpress.com/

Same with the Chios refugees, who are now detained in Tychero, Evros, near the border with Turkey. The police chief of Alexandroupolis has been contacted by journalists and there are two important facts : first, that there were children among the immigrants, who have now been tranferred to Thessaloniki (the exact place is unknown) and, secondly, that he does not want to give a clear answer on what they plan to do. However, it is considered certain that the police wants to «return» them to Turkey.

WASHINGTON - The Greek government has come up with a novel solution to a growing backlog of asylum appeals: Abolish appeals.

No backlog. No Problem.

But the problem can't be dismissed so easily. Greece has a backlog of about 30,000 cases. A part-time asylum appeals board hears about 60 cases a week. At this rate, it would take about 10 years to clear the current backlog alone.

But wait. Greece, with its long coastal borders, is at the front line of migration to the European Union, with nearly 20,000 new asylum applications lodged there last year. Part of the reason is E.U. law, and the so-called "Dublin rules," under which other Union member states can send asylum seekers who entered the E.U. through Greek borders back to Greece.

Last year, the Greek asylum approval rate was 0.05 percent. Since essentially everyone is initially denied, the appeals have been growing faster than the system's capacity to keep up.

Anyone with a pocket calculator can see that the system doesn't work. But it is not just a question of numbers. Each number represents a person. One of them is "Hamed," who fled Afghanistan alone at age 13 when a local warlord threatened to kill him if he did not submit "for dancing and more."

His asylum interview took place in 2008 in a noisy, crowded room in the Petrou Ralli police station:

"The policeman in civilian clothes asked something and the Iranian woman [the interpreter] told me I should say I came for a better life.

The obvious solution is to have specially trained officials, including specialists in interviewing children, conduct careful, private interviews, and grant asylum to people who need it. Then, an independent body should work full-time to consider appeals in a fair and timely way.

Instead the government has introduced Presidential Decree 81/2009, which makes a bad system worse.

First, instead of creating a corps of specialized asylum interviewers capable of identifying people needing protection, the decree spreads the job of interviewing asylum seekers to police directorates throughout the country.

Police officers have a host of other duties and lack training in asylum law or in conducting interviews with fearful and traumatized asylum seekers.

Competent interpreters and asylum lawyers, in short supply even in Athens, are almost absent in the islands and border regions.

Second, the decree abolishes the right to lodge an appeal and eliminates the asylum appeals board (after it finishes the cases currently before it), retaining only strictly limited judicial review. The UN High Commissioner for Refugees has declined to participate in the new asylum procedure, saying that it does "not sufficiently guarantee efficiency and fairness."

Greek asylum procedures are just the tip of the iceberg of a system that fails at every stage to protect refugees and unaccompanied children.

These failures include illegal push-backs of migrants at the Turkish border, the puncturing of boats in the Aegean Sea, deplorable conditions of detention, police brutality, and various legal and administrative tricks to keep asylum seekers from lodging a claim, all of which Human Rights Watch exhaustively documented in two reports published late last year.

In June, the European Council's Committee for the Prevention of Torture issued a report, saying that its repeated recommendations since 1997 to improve the conditions of migrant detention have been "largely ignored by the Greek authorities."

Greece responded with legislative changes that extend the period of administrative detention to up to one year, and possibly 18 months. And, on July 12, the Greek authorities burned and bulldozed a long-standing campsite at Patras occupied by migrants, including many unaccompanied children, thus swelling the numbers being held in unacceptable conditions of detention.

If Greece does not put its own house in order, the European Union must hold it accountable. Other E.U. member states should suspend all returns of asylum seekers to Greece under the terms of the Dublin Convention and all E.U. institutions should demand that Greece immediately comply not only with Union asylum standards, but also with human rights norms that should long since have been considered inviolable among European states.

Bill Frelick is the refugee policy director at Human Rights Watch and the author of "Stuck in a Revolving Door: Iraqis and Other Asylum Seekers and Migrants at the Greece/Turkey Entrance to the European Union."
Eingestellt von busyshadows um 15:49