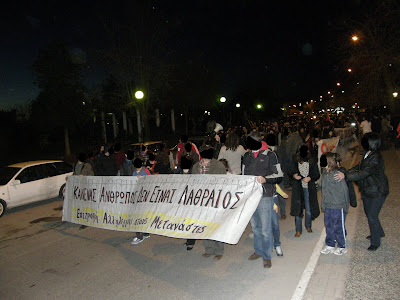 on wednsaday a migrant has been beaten bei police in the harbour of Igoumenitsa
see pictures
http://athens.indymedia.org/front.php3?lang=el&article_id=1146452

last wendsday another migrant was on a ferry coming from Italy and was beaten on the boat from security people and italian police.
in the hospital of FILIATA the doctors found out that he has injuries inside his body from the hitting and also concetration of fluids in his abdomen because of the injuries.

15 days ago ,two migrants on the way to the medical center of Igoumenitsa got stopped brutaly by policemen who told them:
there is no medical center for you!

and the police continues to destroy the jungle in Ladoxori ,
like on the 4.3.
living behind them 6 wounded migrants.

the situation in Igoumenitsa is out of control.
the policemen show openly their racist brutality.
but now there are not only the lokals looking at them but also solidar people from around greece.

nothing will remain without an answer from now on!
the demonstration on the 2.3 was only a begining.

we are on the side of the migrants!
deportation for police and nazis!
Eingestellt von busyshadows um 12:18