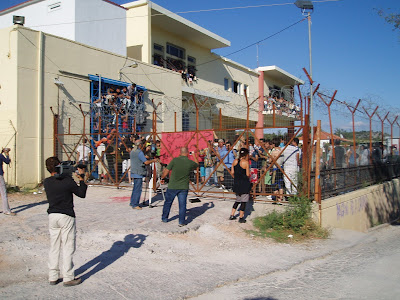 the refugees broke the doors of three cells and the metal doors of the second flour and went out in the yard regainig their freedom in the air that was denied to them so long. they burned some matrasses and clothes and screamed freedom for around 5 hours.

they did not want to escape they said ,if they wanted they could have done it,they wanted to get free and become the paper to be able to continue their journey.

their opinion about greece europa and the human rights is badly disturbed.

during the revolt a bus arived with 40 new refugees.they stayed for hours in the bus having a first impression of what expects them. their transport was also done by two frontex men who know do not have a boat to be out in the sea but control papers in the harbour.

the minors who refused to enter, got the promise from the prefect that they will be left free up to friday and get tickets for the boat. they were not willing to believe the promises they had already heard before. the prefect promised also to reopen the camp of PIKPA near the airport that was opened temporarely during the pressure of the NOBORDER camp, a WELCOME center without police and with open doors.it will be specially for families that can go direktly there and get registered and then leave the island wihtout going to pagani prison. in winter in PIKPa 40 people can stay.

the refugees decided to return to the cells and immediately workers started reparing the broken doors of the prison.but the refugees said if the promises are not kept they will start again a revolt.